Though they only replaced Mercury, Silver Oxide and Alkaline Button cells in the late 20th century they were in commercial use in large batteries from the 1930s. Today very large 9V packs perhaps over 100 AH are used in Electric Fence Power (Farmer’s Fencers). Small button cells are used in hearing aids but not in Watches. A Zinc Air cell consumes oxygen from the air so quickly stops working in a sealed gadget like a watch. Additionally while the shelf life in the packet is very high as soon as it’s exposed to air it starts to discharge even when no current is drawn. Hence intermittent applications are not usually suitable but continuous use in a Hearing aid (perhaps 16 hours a day every day) or Electric Fence PSU (continuous) is ideal. Large Zinc Air Batteries were used in USA “Farm Radios” in the 1930s for the filament LT or “A” cells. (Battery Valve Table radios in rural situations without Electricity). Even in the UK in 1948 /1949  more than 20%  may have had no mains Electricity, but the UK use Lead Acid for LT. The electrode reactions for a zinc air battery are as follows

The Zinc Air cell isn’t rechargeable. For larger cells & batteries the IEC round /cylindrical cell designation is AR and square cross section AS, thus a 8.4V or 9V pack is 6AS4 and a 7.5V 90AH pack might be an 5AR40 as they usually are R40 (Flag Cell, #6) sized in a larger tub. 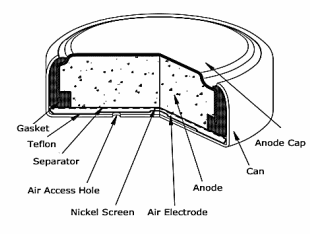 The electrodes are gelled zinc powder for the anode and catalysed carbon cathode with access to the hole for oxygen. The zinc anode is consumed to zinc oxide just as in a Silver Oxide battery. Electrolyte is Potassium Hydroxide (KOH) Exterior surfaces are Nickel. (Shown left is construction of a miniature Silver Oxide Button cell. If 3V or multiples of 3V are required then the Lithium primary coin cell might be more suitable. If the equipment or gadget is sealed or used intermittently for more than two weeks and about 1.4V is required then Alkaline or Silver Oxide (superior but more expensive and 1.55V nominal) is required as the Zinc Air cell self Discharges in 2 to 4 weeks. Other than the self discharge issue, it has the most similar voltage & discharge  profile to the now banned Mercury cells..

If 3V or multiples of 3V are required then the Lithium primary coin cell is superior. If the equipment or gadget is sealed or used intermittently for more than two weeks and about 1V to 1.6V is required then Alkaline or Silver Oxide (superior but more expensive) is better. Large batteries (about 9V 90AH) are used to power farmer’s electric fences (Fencers) and miniature 1.3V button types for hearing aids. 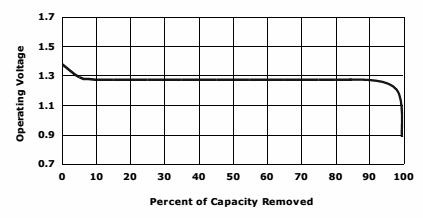 It may be possible to regenerate large Zinc air cells based on a cassette/cartridge system.