From the 1940s a "layer type" biscuit cell was used for HT or "B" packs. From the mid 1950s it was used for Transistor radios, mostly 9V, or 6 cells. At lower currents the capacity is much higher and also it fits a rectangular or square space with less voids also decreasing  size or increasing capacity. The internal resistance is much higher so they are unsuitable for high current drain like tube filaments, lamps or motors. The USA Eveready may have first developed them for small HT packs of the 1940 Personal Radio sets which didn't appear in the UK till 1946/1947 (Romac, Ever Ready, Vidor and Marconiphone/EMI).

For the PP3 the layer pack is about 460mAH or more at 12mA. But the Alkaline is only 590mAH at 12mA because the 6 LR61 cells waste space compared to the Layer cells. Since at best the Alkaline costs twice as much it's poor value compared to layer type. In contrast since the regular cylindrical Alkaline is x2.4 to x3 life of Zinc at low current draw, the Alkaline as long as no more than x2 price are better value. 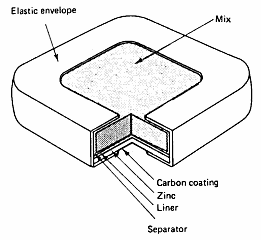 In 1954 "Radio and Television Reference Book", (Gen Ed. Molloy) it's claimed a layer-built battery pack is about 2/3rds  weight and  1/2th the volume for the same capacity. Also mentioned is the Valve Manufacturer's recommendation that the LT pack should be 1V per cell when the HT pack is totally exhausted (stated as 0.75V). In general the DK91 / 1R5 (the original Miniature All Dry tube) operates only down to 1V as mixer/oscillator.

Most of the later 1950s Transistor Power Packs (PP3, PP7, PP9 etc) appear to use the same layer cells as the older HT packs. Capacity reduces dramatically at higher currents as internal resistance is high. The longest life pack for a 9V transistor set was the PP10 using a two pin connector rather than snaps.

There are not "Zinc Carbon" and "Zinc Chloride" versions. There are Alkaline, NiCd and NiMH rectangular cells in rectangular cases but other than "naked" PCB NiMH  these are now very rare. In practice all Alkaline and most NiMH replacements of layer pack use button, coin or cylindrical cells. The  6LR61 Alkaline  may give only 14% to 20% extra capacity  compared to  Layer 6F22 as it's 6 off  cylindrical LR61 cells (similar to "AAAA", size, perhaps 1.5mm shorter) but has a longer shelf life and less "droop" in discharge vs time hence superior for Smoke alarms but poorer value to make 45V to 120V "HT" packs.

US Eveready / NCC called the layer type pack "mini-max" and UK Ever Ready "Batrymax". Only the 6F22 (9V PP3) is now commonly available though the 6F100 (9V PP9) is still produced

capacity (mAH)
The capacity of the battery in current by time. Larger batteries (car) use AH. It's not exact because it depends on the amount of current and for some cells if continuous or intermittent. If the battery is discharged at high currents the internal resistance and electrochemical action can result in only 1/2 to 1/5th capacity. If discharged very slowly the capacity can be 80% or as low as 20% (1/5th) for Zinc Air or NiMH due to self discharge. So 100mA may be 9 hours or less and 10mA 110 hours for 1000mAH (1AH) AAA battery.